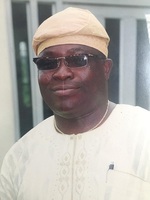 Alex Olalekan Balogun was born as Wasiu Olalekan Ajani Balogun on Saturday, December 21, 1963 in Lagos, Nigeria. Born to his later parents Pa Tijani Sanni Balogun and Kojusola Apinke (of blessed memory). He was the last of five children which resulted in him being overpampered, but his elder brother helped to raise in the most upright way. Growing up he enjoyed playing football while attending the famous Loyola College Ibadan.
After leaving Nigeria to further his education in Germany, he assumed the name Alex. After visiting his friends in the United States a couple of times, he liked it so much, he decided to relocate to Chicago, Illinois in January 1993 where he would soon meet his future wife Ms. Abiodun Mobolaji Durojaiye at Christ Healing Evangelical Church (CHEC). They married on December 28, 1996 and were blessed with 3 children; Fiyinfoluwa, Ayotunde and Ayobami.
Alex lived in Chicago for 13 years before relocating to Tennessee and finally to Atlanta, Ga where he would spend the last of his years. He became a member of Jubilee Christian Church International where he enjoyed loving and serving the Lord. He was ordained as a Deacon in his church.
Alex was great and loving Father. He enjoyed playing with his children and teaching them valuable life lessons, like learning how to drive. He was a cheerful person which also made him a great entertainer both in his home and in the office. He was very clean and tidy and loved to dress up and look good. Alex enjoyed travelling and had visited a multitude of countries, his favorite of course being his home country of Nigeria. He was loving, kind and always wore a smile. Some people wondered if he ever got angry. He loved life and enjoyed listening to music, especially King Sunny Ade. He will greatly be missed by his wife, children Kevin, Tobi, Fiyin, Ayotunde and Ayobami, his brother Mr. Sunday Fafunsho, his nieces, nephews and every other loved family member.
Goodnight Olalekan, continue to rest in the everlasting arms of the Almighty. We love you, but Christ loves you more.