To share your memory on the wall of Roxanne Woods, sign in using one of the following options:

A native of New Hartford, New York, Roxanne was born on August 18, 1960 daughter of the late Frank and Barbara Joan Thrasher Woods. She was preceded in death by grandson, Treyveon Brooks in 2007.

Affectionately known by friends and family as “Foxy Roxy”, she was known for her great sense of humor, and always putting other before herself, and adored her grandchildren. She attended Sugar Hill Methodist Church.

Memorial services for Roxanne will be conducted on Saturday, September 12, 2020 at 2 p.m. from the Chapel of Bellamy Funeral Home.

The family will receive friends from 1 p.m. until the service hour.

We encourage you to share your most beloved memories of Roxanne here, so that the family and other loved ones can always see it. You can upload cherished photographs, or share your favorite stories, and can even comment on those shared by others.

Posted Sep 08, 2020 at 01:35am
Oh wow, who ever thought you would leave us so soon. I just had touched base and got your number a month ago and was so glad to see you. I always thought and asked about you through the family and hoped you were doing well. But when I got the bad news on Sept.3, I knew why I had seen you. It was to say good bye my friend I will always love you and that smile. We had good times when we where kids that will never be forgotten. But life has its up and down and we have to take life and love it as it happens. You where one of a kind with your witty charm and I will miss that in this mixed up place. But Roxanne you are gone to that home of everlasting life and no more pain no more sorrow no sadness . Just peace in the valley for you and your family that will greet you. Say hey to my Brother and Daddy I know they will welcome you home . Till we meet again on those streets of gold you smile and save a place for me. Cause I will be with you again some day .
Love you , your friend forever Lisa Chotas Quarles.🙌🏻🦊 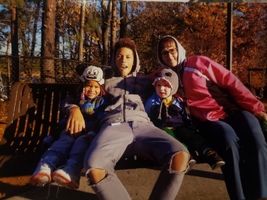 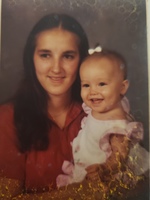