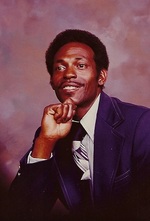 On February 16, 1943 William James Storey was born to the late Lucille (Williams) Storey and Wilson Storey in Brownsville, Florida by a mid wife.

He began his education at Liberty City Elementary School, graduated to Dorsey Skill Middle School, and completed his education at North Western Senior High School; where he learned the trade as a tailor (seamstress) and he exercised the hobby of running track.

Buddy Boy, which he was lovingly known as, practiced his spiritual faith at a Baptist Church in Coconut Grove, Florida residing by Reverend Ship.

He served in the United States of America Army in 1961 and was released under medical discharge. He later served as a Police Officer of Menlo Park municipality in California and finished his labor retiring from City and County of Santa Clara, California. He was a brother in the Masons and served in his lodge.

Buddy Boy had many trades and hobbies, he worked very well with his hands as a carpenter and a mechanic. He loved fishing, camping, and playing dominoes; a game he had a high ego that no one could conquer him in the game.

Buddy Boy was the fifth sibling of eight, in which he preceded three sisters; Mattie Will (Storey) Oliver, Grace (Storey) Smith, and Veronica (Harris) Moeller.

In the month of February, Buddy Boy became ill and was unable to recover back to health. He transitioned on April 22, 2022 to glory with his wife Geneva Storey of 50 years by his side.

Funeral Services will be held Monday, May 9th at 1:00pm from the Chapel of Bellamy Funeral Home. After the services, Mr. Storey will be cremated.

The family will receive visitors at the funeral home on Monday, May 9th from 11am until 1pm.